The Stony Brook Center for Game Theory, known until recently as the Center for Game Theory in Economics, grew out of the former Institute for Decision Sciences (IDS), established by Michel Balinski at Stony Brook University in 1987. The Center has organized 84 international conferences and workshops and has hosted over 2700 scientists since its establishment. According to Nobel Laureate Kenneth Arrow, who reviewed the IDS some years ago, the resident and affiliated members of the Center constitute “a Game Theory group that is unequaled in the United States, if not in the world.”

The impact of Game Theory on economics and other disciplines in the social and natural sciences is pervasive. Its concepts and techniques have become commonplace in the study of industrial organization, international trade, bargaining, and the economics of information, to name just a few economic applications. Uses of Game Theory in non-economic areas include studies of legislative institutions, of voting behavior, of communication and persuasion, of fashion, of revolutions and popular uprisings, of international conflicts, and of evolutionary biology. Its impact was reflected in the 1994, 2005, 2007, 2012, 2014, and 2020 Nobel Prizes in Economics, which were awarded to 13 game theorists.

Since 1990, the Center has organized yearly Summer Festivals on Game Theory, which bring together prominent game theorists and many leading economists from around the world. These festivals contribute to the international visibility of the Stony Brook Economics Department as a premier locus for teaching and research in Game Theory and its economic applications. Approximately 200 participants come each year from Asia, Europe, and North and South America. Among them, we’ve had the pleasure to welcome fourteen Nobel Laureates in economics: Kenneth Arrow, Robert Aumann, Gerard Debreu, Eric Maskin, Paul Milgrom, Roger Myerson, John Nash, Alvin Roth, Thomas Schelling, Reinhard Selten, Lloyd Shapley, Vernon Smith, Jean Tirole, and Robert B. Wilson; five of them are members or affiliated members of the Center.

During the Summer Festivals, a one-week international conference is held, covering a broad spectrum of current research. The Center organizes two additional workshops on specific topics. The focus of the summer activities has been not only on Game Theory per se, but on its applications, mainly in Economics. Topics covered in past workshops include Auctions, Computer Science, Contract Theory, Evolutionary Biology, Experimental Economics, Finance, Incomplete Markets, Industrial Organization, Innovation and Patent Licensing, International Trade and Development, Law and Economics, Macroeconomics, Mechanism Design, Neuroeconomics, Political Economy and Political Science.

The Center’s activities have been mainly funded by the National Science Foundation, although a variety of other academic departments and institutions, among them Bellcore, the University of Valencia (Spain), NATO, and the Stony Brook Department of Political Science, have provided financial and organizational support to the Summer Festivals. 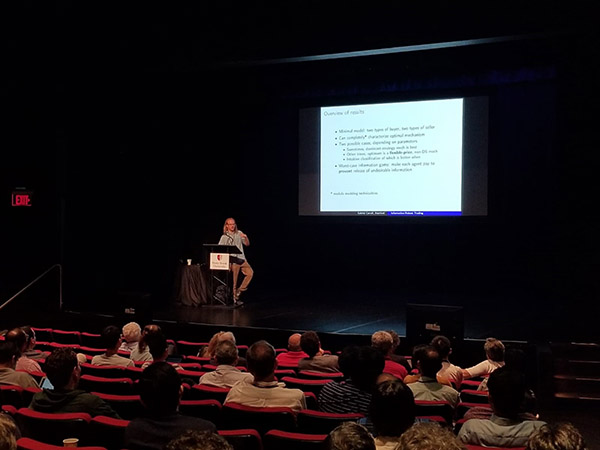